Rumours abound that John Terry may be reinstated as England Football International Team Captain. This may go some way to restore some confidence in Capello who should never have taken the captaincy from him.

Whatever Terry’s crimes, we wait for the full story on that, I am certain he did not deserve the treatment the press, public and football community have  lavished upon him.

Whatever his weaknesses as a person or his failings as a footballer may have been he has never failed to respect the England or Chelsea football shirts, wearing both with honour and pride and always giving of himself 100%.

I am sure his wife recognises the true merits of John Terry for she has been loyal throughout his apparent fall from grace and subsequent post trauma troubles and rehabilitation . As far as I can see and from the facts to hand she is the only one who has been truly wronged by his alleged misdemeanours despite Wayne Bridge’s pouting disapproval of his ex-girlfriends choice in men. No England fan, no Chelsea fan have been misled by Captain Marvel’s dedication to his job. They continue to see the best the guy can be so give the guy a break, he certainly deserves one and should the nation accept he truly is the right man to lead us into the Euros that vote of confidence will do wonders for his returning form. 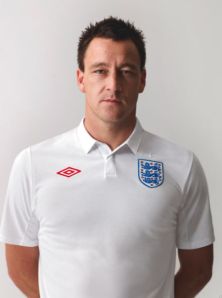 '...he has never failed to respect the England and Chelsea shirts...'

Bobby Moore, David Beckham, Terry Venables, Gazza, even the wonderful Gary Lineker were not faultless. None of these heard boos ringing round Wembley nor had jokes and jibes constantly made at their expense within the country they love so clearly. Come on nation that is England, embrace your fallen leader like a spartan of old. J.T. has shown enormous character and strength to endure these past 12 months. Perhaps he can, after all, lift us a trophy at last in Poland next summer despite the ignominy of last years World Cup fiasco in South Africa.

I'm a writer ... I write .. . I’m not sure why I ever stopped, was it 9/11? .. . edenbray is born ugly, wet and covered in blood, mucous and bodily functions ~ the effluence of my short life .. . I am a Writer and Artist since 1966 - I'm an avid Blogger ~ I write lots of poems, written essays, articles, reviews, opinion + comment .. . I have had many poems selected for Anthologies of verse and recently have published many of my poems in 24+ themed booklets ... please ask for details - join the shebang by leaving me a marker with a 'like' or a comment for my ego and encouragement and thanks for listening - I really value your interest ~ edenbray
View all posts by edenbray →
This entry was posted in EDEN'S VIEW. Bookmark the permalink.