No sooner has the news broken that Pep Guardiola, Mr Roman Abramovich’s alleged and universally assumed 1st choice as Chelsea manager, has revealed his preference when returning from a sabbatical taken in New York and concluding this summer is to take up the position at Bayern in Munich than the speculation monster has turned its malevolent attention on the unsuspecting and quietly successful manager of Championship outfit Watford FC.

Despite the huge, effective and mysterious shroud of secrecy that hovers over Mr Abramovich like the rain-giving swell of low pressure that intimidated Great Britain last year. R.A. has managed to run the show at Stamford Bridge without conducting a single press interview during a near decade of ownership and yet we are consistently told what the quiet Russian thinks, decides and desires but do we really ever know and why are the sports press in this country so consistently obsessed by whats happening at Chelsea anyway.

At the height of his popularity back in the late sixties the trash of Bob Dylan was searched by journalists trying to find out all they could about the poet/folk singer turned pop star. Dylan’s response when hearing of his trashcan being searched by one eager beaver journo was – ‘Boy, this guy needs to take a rest.’

Why is it assumed that the whole of the football world is interested in what happens at Chelsea. The last thing I want to hear about is whats happening at Old Trafford, the Etihad, the Emirates or White Hart lane. 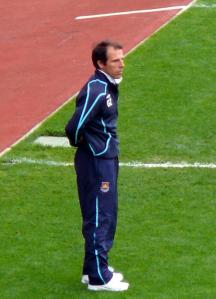 … And so the assumed obsession for news about the managerial position at Chelsea FC now turns its many-headed attention on the quietly unassuming little Sardinian.

God, give us all a break! Surely football has more to offer than this.

After watching Ian Holloway featured on the interview on this post I had to laugh at Ian’s trademark and uncompromising response to speculative questions about the future of his Crystal Palace star striker. During the interview he alludes jeeringly to Sky’s Transfer Window feature they run almost like a late-night National Polling swing-o-meter at the General Election and last night on Sky’s Sports Programme I tried to watch the feature through the critical eye of Mr Holloway. I found myself laughing out loud at this nonsense and agreeing wholeheartedly with the guy. This particular feature is based purely on conjecture and speculation. The interviews with managers revealed not one definite or interesting piece of news but was more like a training film produced to aid coaches on how to deal with the media.

Full marks to Ian Holloway, thanks for the laugh and please, please, please – football fans everywhere > NEWS about Chelsea’s revolving door managerial position really IS NOT that interesting … journalists everywhere leave Gianfranco alone he doesn’t know !!! … and in the words of Dylan  ‘Boy you need a rest…’

A SKY-TV ‘TRANSFER WINDOW’ SPECULATING FEATURE FROM LAST JANUARY – HOW INTERESTING NOT – INFORMATIVE NOT – ACCURATE NOT – GROUND BREAKING NOT !!! DON’T YOU JUST HATE SKY’S INTRUSIVE ARROGANT MIS-INFORMED PROPAGANDA – THEIR OVER ANALYTiCAL, PATRONISING COVERAGE WILL KILL THE SPORT FOR ME ONE DAY I KNOW IT WILL – THERE, A RANT OF MY OWN …

I've always enjoyed writing and that is all I want to do... .. . I’m not sure why I ever stopped, was it 9/11? .. . Edenbray is born ugly, wet and covered in blood, mucous and bodily functions. The effluence of my short life .. . I am a Writer and Artist - since 1966 - I'm now an avid Blogger ~ I write lots of poems, written essays, articles, reviews, opinion + comment .. . I have published many of my poems in booklets ... please ask for details or just join the shebang by leaving me a marker with a 'like' or a comment for my ego and my encouragement :- thank you so much for listening ~ edenbray
View all posts by edenbray →
This entry was posted in EDEN'S VIEW and tagged ABRAMOVICH, CHELSEA FC, pep guardiola, shroud of secrecy. Bookmark the permalink.