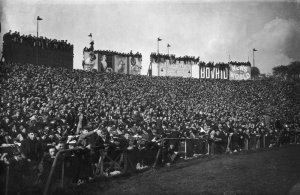 100,000 at the BRIDGE for MOSCOW DYNAMOES - The FA would not let us become Britains 1st entrant in European Cup

TODAYS RANT – HISTORY – Who Says We Have No History =A little known FACT …. In 1955 CHELSEA were Champions and applied to enter the 1ST EVER EUROPEAN CUP- The English FA turned the application down. Manchester United at the time were of course a famous club but their history and present day worldwide popularity were very much defined by events in the fifties. The following year as the NEW champions they applied to enter THE 2ND European CUP and the FA gave them permission. (what was that all about???) So Man U were allowed to enter as Englands first representatives along with Milan, Benfica, Real Madrid etc.

Of course the Munich Air Disaster, which deservedly evoked worldwide sympathy, encouraged the perception of the time that they were indeed England’s premier club. So my POINT is?
…. REWIND TO 1955! The FA agree to Chelsea’s forward thinking request to join the European Cup with no procrastination – Chelsea go on to the SEMIS, FINAL – they EVEN WIN THE THING – Whose England’s Premier Team now … JOIN THE DOTS .. Those dunderheads at the FA unfairly denied Chelsea the opportunity to gain deserved worldwide popularity at the dawn of Modern Football’s birth.

We know Chelsea’s history this is some of it!!!

I'm a writer ... I write .. . I’m not sure why I ever stopped, was it 9/11? .. . edenbray is born ugly, wet and covered in blood, mucous and bodily functions ~ the effluence of my short life .. . I am a Writer and Artist since 1966 - I'm an avid Blogger ~ I write lots of poems, written essays, articles, reviews, opinion + comment .. . I have had many poems selected for Anthologies of verse and recently have published many of my poems in 24+ themed booklets ... please ask for details - join the shebang by leaving me a marker with a 'like' or a comment for my ego and encouragement and thanks for listening - I really value your interest ~ edenbray
View all posts by edenbray →
This entry was posted in Uncategorized. Bookmark the permalink.